Both the International Monetary Fund (IMF), the Financial Secrecy Index and the Organisation for Economic Co-operation and Development (OECD) has designated Cook Islands an offshore financial centre. Cook Island however isn’t your standard offshore banking haven. Instead, its focus is on trusts rather than on standard banking accounts.

The Cook Islands does not require bank accounts, real estate or other assets in the fund to be physically located in the Cook Islands. It is very common for the bulk of what a trust owns to consists of a Cook Islands LLC. The LLC can then hold bank accounts, brokerage accounts, custodial accounts, etc in other jurisdictions. The investor can be the Manager of the LLC and retain hands-on control without having legal ownership.

The Cook Islands charge a tax on trusts and this has become an important source of income for the islands. The trusts are also creating jobs on the island, which in turn generate tax revenue.

Under the Cook Islands International Trusts Act, a creditor seeking to have your transfer of property to your Cook Island trust set aside for the creditor’s benefit must (among other things) prove the following:

To further discourage frivolous lawsuits, contingency-fee litigation is banned in the Cook Islands. 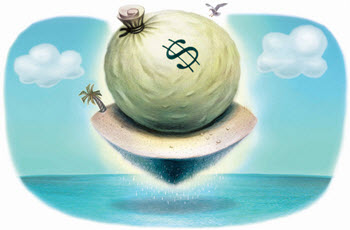 As mentioned above, Cook Island is not your typical offshore banking haven. The Cook Islands are famous for their trusts, not for their banking services. Banking choices are limited, and trusts tend to hold their assets through banks and similar entities outside the Cook Islands.

The Australia and New Zealand Banking Group (ANZ Bank) has an office in the Cook Islands, but is not eager to accept foreign depositors.

Economy of the Cook Islands

The Cook Islands relies heavily on tourism, and also receives substantial amounts of foreign aid – especially from New Zealand and China. Remittances from emigrants are important for many families. Attempts at diversifying the economy with agriculture, mining and commercial fishing has met with varying success. The Cook Islands export small amounts of citrus and other tropical fruits, as well as pearls, clothing and handicrafts.

Since the late 1980s, The Cook Islands has been a location specialising in asset protection trusts. Taxes on trusts and trust employees now account for roughly 8% of the nation’s economy, which is more than what the whole fishing sector accounts for.

About the Cook Islands

The largest population centre in Cook Island is the island of Rarotonga and this is also where you find the international airport.

Short facts about the Cook Islands